Today, I actually have a wonderful guest post for you all! After hearing about Kylie McNeil’s awesome plans for her own fictional world, I invited her to do a guest post on my blog. Here is her advice on how to develop fantasy races. I am so excited to have her post today! I know that her advice is helpful and awesome, so I can’t wait to hear what you guys think about this post!

Now a little bit about Kylie: she has a Bachelor’s in Biology and a Master’s in Immunology and currently is working as a lab technician for a drug development company.  When She is not working, she is either writing epic fantasy, spending time with her family, fellowshipping with God and her circle of Christian brothers and sisters, sewing superhero costumes, binge-watching Netflix, or smothering her cat, Pippin, and her dog, Tauriel, with affection—or some crazy combination of those. She can be found on: Facebook ~ Twitter ~ Pinterest

If you would like to do a guest post for my blog, please let me know! I would love to have a couple other writers post each month. You can head over to the Contact Me page to let me know that you are interested. 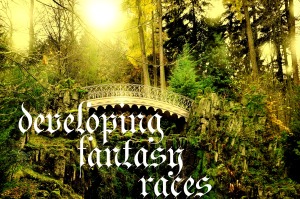 I believe that no fantasy novel is complete without its multiple sentient races and their interactions with one another.  Whether a fantasy story includes the typical races of the genre (e.g. humans, elves, dwarves) and/or races that are completely unique to one book or series, fleshing out the details of both common and unique races to your story is paramount to making those races not only believable, but such an integral part to your story that the reader cannot imagine your fantasy world without them.

Other bloggers have written posts on this topic with much more detail (the one I recommend is http://tinsky.hubpages.com/hub/Creating-a-New-Fantasy-Race, in case you’re interested), so my main goal here is to summarize the areas of race development I tend to focus on, while also sharing some examples from my own series.  I’m working on my first fantasy series ever, so I do not claim to be an expert in this area.  But, since most of us who commune on this site are aspiring authors, I wanted to share my personal experience, hoping that it will both inspire and equip you in some way.

I don’t think there’s any wrong or right way to decide on what races, or how many, to incorporate in a story, as long as they’re integrated in such a way that doesn’t distract the reader from the story itself—that is a whole other topic that I won’t delve into right now.  But I think that, in order to make a fantasy story more “realistic” and involved, there should be more than one race, or at the very least, one race (e.g. humans) that is further diversified into subgroups or “sub-races” (e.g. magic vs. non-magic humans).  If you’re like me, however, you may use multiple “foundation races”—mine are humans, elves, and nymphs, in case you were wondering—and further divide each of them into sub-races.

When incorporating common races of the genre, such as humans and elves, I am tempted to define them by their cliché stereotypes, since these races are so prevalent in the genre that it would seem strange to portray them any differently.  Therefore, I make the clichés a little “less cliché” by putting a slight twist on one or more of those commonly-used characteristics, as well as give each race additional traits, just enough to make them unique.

For instance, my elves are still immortal, wise, fair, and have pointy ears, yet I also made them highly intelligent, and with that, technologically advanced (if you want to know how advanced, you’ll have to read the series once it’s finished, wink-wink).

I also detract from common racial clichés by adding lesser-known fantastical races.  For example, I include nymphs as my other major race, which, to my knowledge, are only mentioned in brief in a few fantasies (such as the Percy Jackson series or The Chronicles of Narnia); therefore, I took some liberties in designing my subspecies of nymphs, yet still portrayed them as beings closely aligned with nature, as Greek lore suggests.

Each race and sub-race has an origin of sorts, whether that origin is purely divine (creation), purely biological (evolution), or a mixture of the two (theistic evolution, which I use).  Knowing those origins not only makes the races more realistic to me as I write about them, but it also helps me build upon backstory elements for both the setting and my characters.**

Regardless of the type of origin, I designate who or what created the race (or altered one preceding race into another), how those races were created, or diverged from predecessors, and why.  For example, my story’s version of God created the first primordial race (which I call the Primordials, for now) for the same reason our God created us: because He wanted a creation to shower with love and mirror His glory.  He then later caused this race to diverge into the three major races via processes of “guided” microevolution—i.e. accumulation of various mutations over time; His reason for this, however, I will keep a secret (for now…).

**Side note: since I have many races with multiple, intertwining origins, I’ve found it extremely helpful to draw a flow chart of sorts, to visualize these origins more clearly.

I’m a die-hard biology geek, so I put a lot of thought into each race’s biological factors (since they are, in fact, living things).  But instead of lecturing you all on basic biology and how it applies, I will simply note the subcategories of biology that I consider, and what they entail.

Of course, what would a fantasy story be without some form of magic?  So I define for each race and sub-race not only what their magical abilities are (if they have them—not all do), but how they can obtain them (e.g. via genetics or divine anointing)—and lose them, if possible.  As far as exactly what abilities to include, I say just wing it, because the possibilities are endless!  I’ve lost count of the types of magical abilities I’ve included; most I have derived from other stories and lore, usually putting my own twist on them.

Although no individual thinks and behaves exactly alike (not even identical twins), I think we can agree that certain behavioral trends (whether genetic or cultural) do, in fact, help define racial groups.  Like with the number of races, I think one can use as many or few as they desire.  Personally, I have only defined three psychological areas that characterize my races: level of intelligence, mode of decision-making (and with that, susceptibility to temptation), and expressions of love (both platonic and romantic).

Furthermore, I try to assign these traits so that they not only reflect the races’ values and external influences, but that the races also complement each other’s strengths and weaknesses, which will make interactions between them all the more interesting.  For example, in my world, elves are highly intelligent and logical (not unlike Vulcans, pointy ears included), nymphs are primarily instinctual, making decisions with basic survival in mind (like animals), and humans, as per usual, thrive on romance and camaraderie, placing higher emphasis on emotion and social interaction.

I saved this topic for last because it is a crucial component of my story’s plot: races are uniting and dividing left and right in response to a cultist threat, which becomes all sorts of chaotic as the story progresses (mwahahaha!).  But even if this plot point is not a frontrunner in yours, it will at least be a side issue that contributes to some aspect of your main character’s culture and personal behaviors that stem from it—or better yet, deviate from it.

Of course, interracial interaction goes beyond just whether one race accepts, merely tolerates, or despises another.  As with origin stories, there is a why and a how: why one race harbors certain feelings towards another, and how they, as a collective, act upon those feelings.

For example, my elves generally look down upon humans because they’re mortal, and with mortality comes intellectual and spiritual limitations that they could never overcome in their short lifespans.  But because elves are also peaceful and moral creatures, and they do not see humans as a major threat to their security, they merely tolerate their existence and leave them be, even trading some of their goods with them, but they do not divulge too much of their knowledge, as they fear humans will corrupt it in some way.

I hope this post was helpful to you all.  If any of you feel that I’ve neglected something important, please feel free to let me know; I joined this blog to learn and be inspired by the thoughts of other fantasy writers, especially those that are fellow Christians.

Speaking of which, I would like to thank Gabrielle again for allowing me to write this for her blog.  Her posts have been very helpful in my own writing endeavors, so I feel blessed to have been given the opportunity to share my own inspirations.