Before I start this post, I just want to thank you guys for being patient as I took March off from blogging and most other social media. I really appreciated the break!

I am now back to blogging, and hopefully will be posting on my normal schedule (Monday, Thursday, and Saturday.) Thanks for waiting for me. 🙂 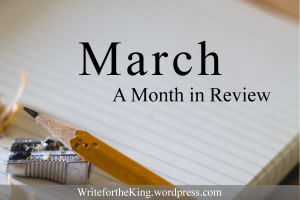 My Life this Month

Since I never did a monthly post for February, I am including that month, too, in this section. February was a big month for me!

Pathetic? Yes. I only read one book last month, The Legend of Sigurd and Gudrun by J.R.R. Tolkien, and it was partially for school (I had a major assignment where I wrote an essay on how Lewis and Tolkien reflect traditional mythology differently in their writings.) I enjoyed Tolkien’s original poem telling the Norse myth of Sigurd, the Volsung. The poetry was very well written, but it would be hard to follow if you did not know the original myth. Christopher Tolkien’s notes in the back provided enough background information for those who are not familiar with the myth, but would be bit tedious to read the notes first. Also, it should be noted, as with most mythology, this story contains some mature elements (like incest and mothers killing their six-year-old sons.) However, I still enjoyed reading the poem and notes; I just could not recommend it to everyone.

I originally planned to do a lot of writing last month, but I ended up doing a little bit of editing and started some rewriting. After hearing some beta reader’s comments, I decided to try rewriting the first four or so chapters in my first novel, Out of the Curse. Unfortunately, I became a bit unmotivated with that half way through the month, so I am still working on those new chapters.

As I said at the beginning of the month, I decided to take a break. I really needed it, and now I am glad to be back. Unfortunately, I did not keep my word and publish the Open Pen Critiques that were submitted. I am very sorry that I never did that, and I hope to get to those quickly, though I cannot promise anything.

Awesome Posts that I found

So while I did not do a ton of blog reading this month, I did find a few great posts.

Plans for Next Month

I plan on posting regularly this month, though I may miss a post or two next week because of finals. I have some writing tip posts prepped about mentor tropes in fiction and copy editing, so you can look out for those. In my personally writing, I actually plan on continuing with the first draft of my second novel rather than continuing the rewrites of my first. Mainly, this is because I feel inspired about the main character in that novel, and I want to act while I am inspired. Inspiration doesn’t come often enough!

So I hope you all had a great month, and I would love to hear what I missed during my break! How has you guys been doing? Thanks for waiting for me to return.